Take a peek behind the scenes of a big live show – our students made use of this opportunity during the „40 Years It’s A Heartache Tour 2018“ by British rock singer Bonnie Tyler. She was invited by award-winning producer and composer Tom E Morrison who, as FOH Engineer, is responsible for Bonnie Tyler’s live sound. The music producers and sound engineers of the future looked over his shoulder with great interest in the „Jahrhunderthalle“ in Frankfurt during the soundcheck and live concert by Bonnie Tyler.

„It was fantastic, an experience I won’t forget in a hurry“, was student Lucy Pape’s summary of the day. „There was absolutely no fear of contact between the band, the technical crew and us. Everyone gave us a warm welcome and we were allowed to ask as much and what we wanted.“ The soundcheck itself was completely relaxed and trouble-free.
„Since this is already the tenth concert of the tour, a lot of things are routine and everyone knows what they have to do and when“, FOH engineer Tom E Morrison explained to his guests. He runs the tour with a digital Yamaha CL5 console. Many things can be programmed in advance which saves time during the respective soundcheck. So there was enough room to ask the award-winning (for the corporate film „The Sound of ABB“) producer and composer about his experience in the music business and receive helpful tips.

The musician, who grew up in Hesse and now lives in London, was already successful in the 90s with the British band Bliss. Since then, he has established himself in the music scene – above all thanks to his versatility. He is active from mixing and engineering for renowned acts such as the British band Underworld, remix for Puff Daddy to compositions and productions for film, TV, Playstation, large corporate brands and theaters. As a composer, Morrison has worked for such well known names as Ken Loach, Jackie Chan (Tuxedo), Rowan Atkinson (Johnny English), William H Macey (The Cooler) and the critically acclaimed independent film „London to Brighton“, as well as the UK gangster movie „Hard Boiled Sweets“. In the Autumn of 2011, Tom E Morrison added Big Sky Song Records and Big Sky Song Music Publishing to their music production company Big Sky Song Music Production. His tip to Abbey Road students: „Be a team player and have the courage to just get on with things and accept the challenges you are faced with.“ 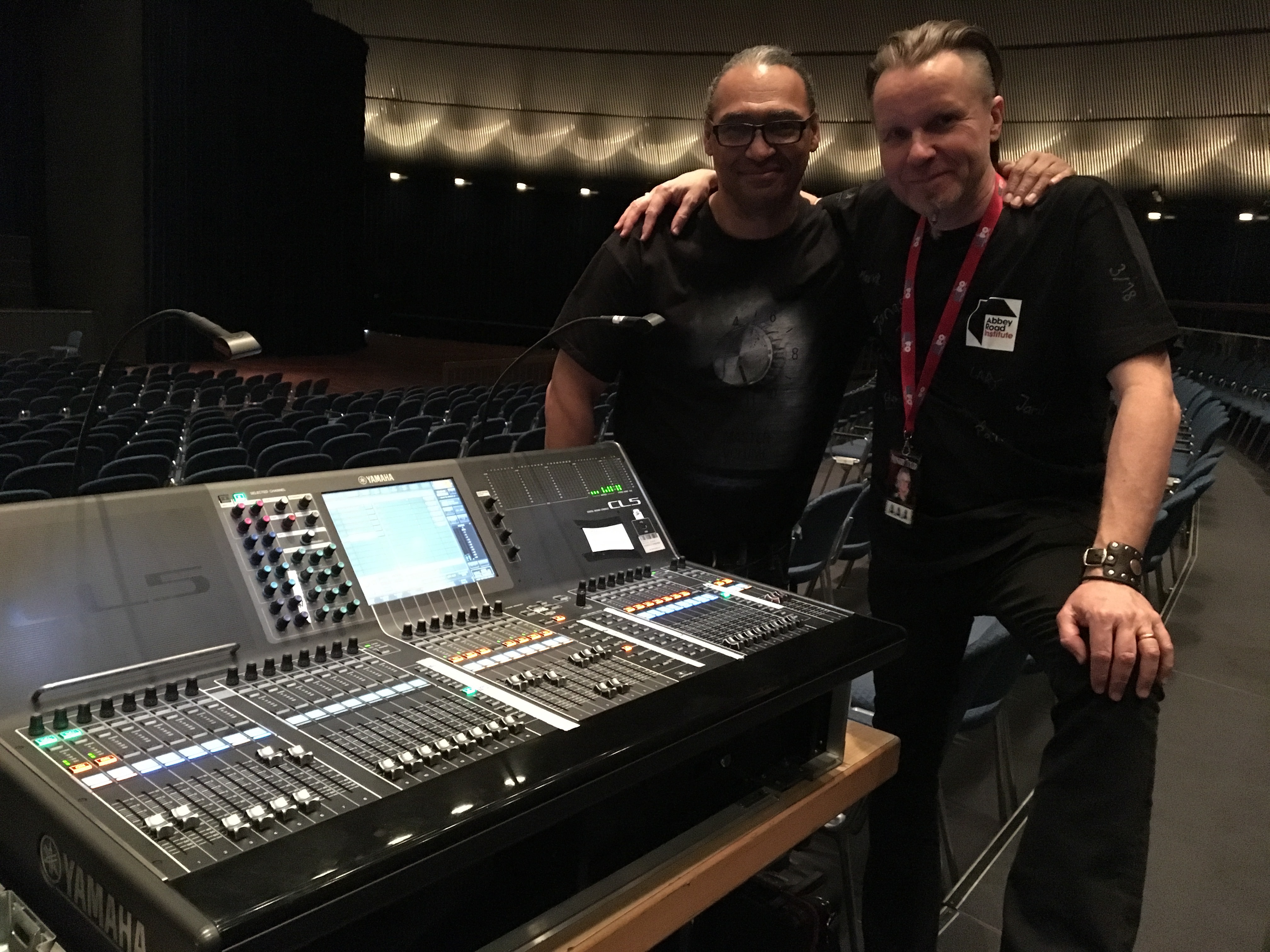 After the soundcheck we went to the big stage in the Jahrhunderthalle, where the musicians‘ equipment was inspected very closely. This led to a lively exchange and a lot of shop talk. Bassist and musical director Ed Poole, who has worked with George Michal and Sam Brown, guitarist Matt Prior, keyboarder John Young and drummer Alex Toff, were all happy to provide information about their work. But they also wanted to know from our students what they are learning at the Abbey Road Institute.

The pros found the information that the course „Advanced Diploma in Music Production and Sound Engineering“ is not simply about sound technology but, in fact, mainly practice-oriented and very much geared to musicality with a focus on „Audio Engineering and Acoustics“, „Music Theory and Production“ and „Management and Business“ great. They congratulated the Abbey Road Institute students on their choice of education and wished everyone much success for their start in the professional music business.

After these exciting insights, the students took in Bonnie Tyler’s (link to http://www.bonnietyler.com/) concert in the evening with particularly sharpened eyes and ears. From their premium seats directly behind the mixer, they had the best view of the stage and the optimal sound. So they enjoyed the performance of the Welsh-born „First Lady of Rock Music“ to the fullest. Bonnie Tyler became known for „Lost In France“ in 1977, landed a world hit in 1978 with „It’s A Heartache“ and was nominated several times for Grammy and Brit Awards. In the meantime, she has produced 16 albums and sold more than 100 million records.

At the end, T-shirts were exchanged with obvious enthusiasm. The band gave the Institute a signed T-shirt and our students handed Tom E Morrison an original Abbey Road Institute shirt with the names of all the participants in the 9/17 and 3/18 classes who took part in this great event.

The Abbey Road Institute Berlin students attended the soundcheck during her stay in Berlin’s Friedrichstadtpalast and were just as excited about this experience.