David „Davey“ Yang is an Austrian producer and composer, who graduated from Abbey Road Institute Frankfurt in 2019. After moving back to his hometown Vienna, David became part of the Austrian Team for the Eurovision Song Contest 2020. He was involved in the production, arrangement, and composition for Austria’s entry „Alive“ by Vincent Bueno.

How did his song end up as the official Eurovision Song Contest entry? What are the main takeaways from his Abbey Road Institute year, and how does he feel about the cancellation of the ESC 2020 due to the Covid-19 pandemic? We interviewed Dave Yang to find out.

Dave, you Graduated from Abbey Road Institute Frankfurt last year. Looking back, what were specific highlights for you that come to mind?

I still remember sitting in my classroom at the beginning of the course and having no idea how an EQ works. Now looking back, I can say that Abbey Road Institute taught me how to start ‘walking’, so to speak. School manager Ulrich Schiller once said to us that you have to master all the technical parts of music production first, so it doesn’t get into your way when working creatively.

The graduation ceremony took place in Abbey Roads‘ iconic Studio 2. How was that for you?

It felt unreal to be in such a historical place. It was such an inspiring experience for me, which is why I promised myself to come back to Abbey Road and record some more music in that magical atmosphere.

Tell us something about your musical background and how it got you into music production.

I started with church music, where I was able to try out many different instruments. My interest in music production started growing after I quit my Jazz music studies.

You have been working with the Austrian singer Vincent Bueno for some time now. How did this collaboration come about?

This is a funny story. I contacted Vincent on social media and sent him some of my music that I have been working on back then. Thankfully, he was interested in working with me, and we have stayed in close contact ever since.

Vincent was chosen to represent Austria at this year’s Eurovision Song Contest, with „Alive“, the song you two have been working on. How did this incredible nomination come about?

Vincent asked me if I wanted to produce a song, which he would then send to Eberhard Forcher, who has been Austria’s talent scout for the ESC for many years. At first, I worked on the song with my classmate Felix van Göns. After graduating, I moved back to Vienna and finished the song together with Vincent and Artur Aigner.  After many rounds, our song got finally picked by the jury to represent Austria. 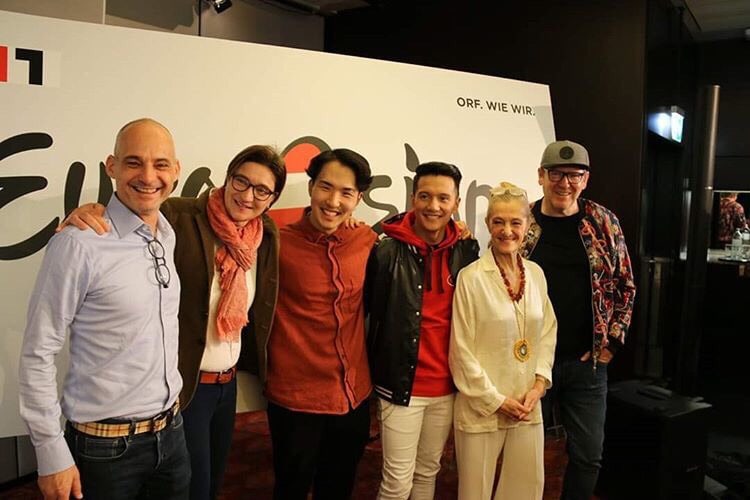 Dave Yang next to Vincent Bueno and the Austrian Eurovision Team

Let’s talk a little bit about the song. What did you contribute to the finished master?

I was involved in the composition, arrangement, and production.

Where was the song produced, and which equipment did you use?

We made the first draft at the institute and made the final touches in Vincent’s studio. We used the Sony C800 as our mic and the BAE 1073 as our preamp.

Who mastered the song, and what did you provide him or her?

The song was mixed and mastered by Nikodem Milewski. I sent him the individual stems.

At the beginning of April, it was announced that due to COVID – 19  this year’s ESC would be canceled. Instead, every participant will be performing live, but not in front of an audience and without any competitive elements. How do you feel about this decision?

Everyone on the Austrian team is very disappointed because we put so much energy into the song and the preparation of the whole live performance. Given that the ESC has always been a competitive format, with a big live audience, I believe that there is no good alternative to the original show. Vincent Bueno was chosen to represent Austria at next year’s ESC, and of course, I will try my best to be part of the team again.

Where do you see yourself in a couple of years – in the role of a performing artist and songwriter, or as a producer/engineer, working “on the other side of the control room window”?

During the past few months, while working together with Vincent and the Austrian broadcaster ORF, I was able to get a glimpse of how the music industry works here in Austria. I learned a lot about the importance of the business behind a song, which is why I want to educate myself more in that area. I will try to take a step into the music business and continue doing my creative work as a songwriter and producer.

What are the most important skills that you have gained during your year at Abbey Road Institute?

I’ve learned to train my ear by listening carefully to the music. Also, it helped me a lot to focus on working fast and clean by finding your workflow.

What other projects are you working on at the moment?

I will continue working with Vincent Bueno and other talented artists, who are looking to release music. Currently, I am spending most of my time learning about the music business. And as I said, I will certainly try to be part again of the production of next year’s Austrian entry for the ESC 2021.

Dave, I want to thank you very much for the pleasant conversation, and I wish you all the best for the future!

Listen to the song below: