Orchestral Manoeuvres. From the Utopia Studios into Abbey Road Studios

Peter Walsh is a multi-award-winning producer and engineer who has been a successful professional in the industry for many decades now. In this following blog article, which was first published by the magazine Sound&Recording in December 2019, he describes his experiences with classical recordings, from him starting out in Utopia Studios in 1979 until his latest big orchestral session in Abbey Road Studio One, together with our freshly graduated alumni in London last October.

My first taste of recording strings was back in 1979 when I had just joined Utopia Studios as an assistant engineer. Phil Wainman, Utopia owner (and my boss!) was producing and the engineer was Andy Jackson (Pink Floyd, Dave Gilmour).
The song, „I Don’t Like Mondays“ by the Boomtown Rats was a #1 hit in the UK and the composer and frontman of the band, (Sir) Bob Geldof, became a household name. A few years later he received a knighthood in recognition of his efforts to stop poverty and famine in Ethiopia through the charity Live Aid, which he co-founded with Midge Ure (Ultravox).

Around 20 string players were crammed into a compact space no larger than my London living room, which is not large! It was „rock ’n roll strings“, rather than classical, in which case the recording style is very focused on the instruments and less on the ambient space. Fortunately, Utopia had a Neve console, a large number of Neumann KM 54s in its collection and Andy to make everything sound a lot sweeter than it actually was.

All the instruments were close-miked at a distance of around 50cm and there were no room mics. As you would expect with this method there is a raw edge to the sound. It is a dry, upfront sound where every detail is audible. You need great players for this kind of recording; there’s no hiding when the microphones are pointing straight at your f-hole! You can hear a similar kind of sound in many recordings of that era – on records by artists like David Bowie, T. Rex and ELO.

By the time all the chairs, music stands, microphones and headphones were in place there was barely room to move, let alone swing a bow. One of the mics needed adjusting halfway through the session and I remember gingerly tiptoeing through the jungle of cables to attend to it, being very careful not to stand on any of the priceless instruments along the way. Trashing a Stradivarius worth more than a house is surely the fastest way to get yourself out of the music business…and I was desperately trying to get myself in!

It was about four years later in 1983 when I experienced my first big orchestral session. This time it was at the world-famous Abbey Road Studios and I was co-producing Scott Walker’s album „Climate Of Hunter“ for Virgin Records. 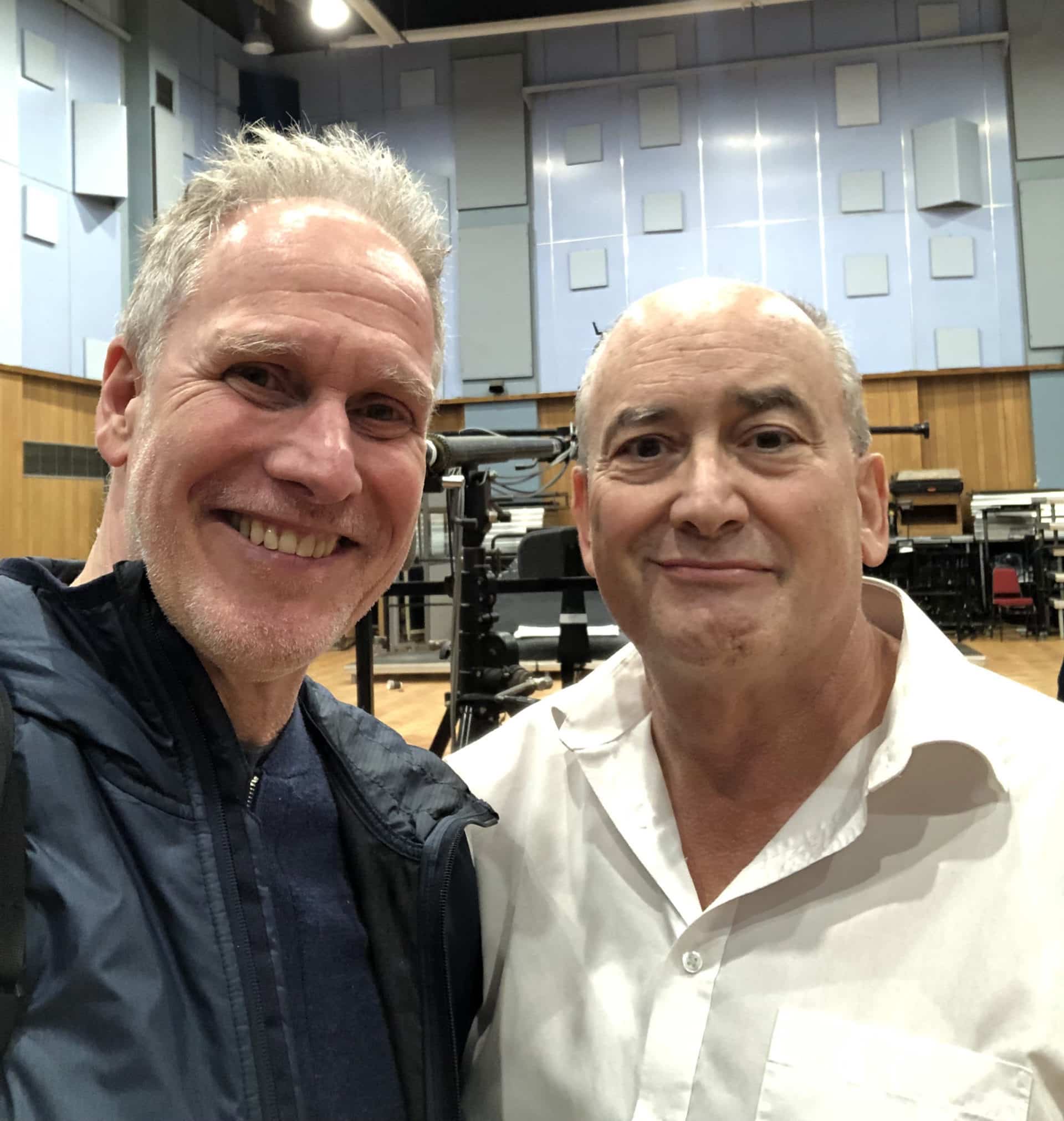 Peter Walsh and John Kurlander in Abbey Road Studio One

On this occasion, I was lucky to have John Kurlander engineering the session. The desk was the same wrap-around TG 12345 that he had worked on with the Beatles. John was a legend even back then, having already worked with the „fab four“, as well as with Elton John and Toto. He was already in high demand as an engineer for orchestral film scores and classical recordings.

Abbey Road Studio One is a very different space to Utopia and recording a large orchestra there has a completely different set of rules. It is more about recording Abbey Road than the musicians sitting in it. The ambience of the room is unique. Everything sounds eye wateringly beautiful. It can make a grown man cry … and actually did. But more about that later!

For „Climate of Hunter“ we used a large string orchestra of over 40 players. The intention was more about creating rich, warm textures and wide soundscapes than anything else. For this we needed a big room to enhance and amplify what was being played.

So how do you make the most of such a beautiful recording space?
How can you best capture the character of the room and reproduce it for the outside world to appreciate? These questions and many more were considered during a special orchestral recording workshop for the Abbey Road Institute held recently in Abbey Road Studio One. 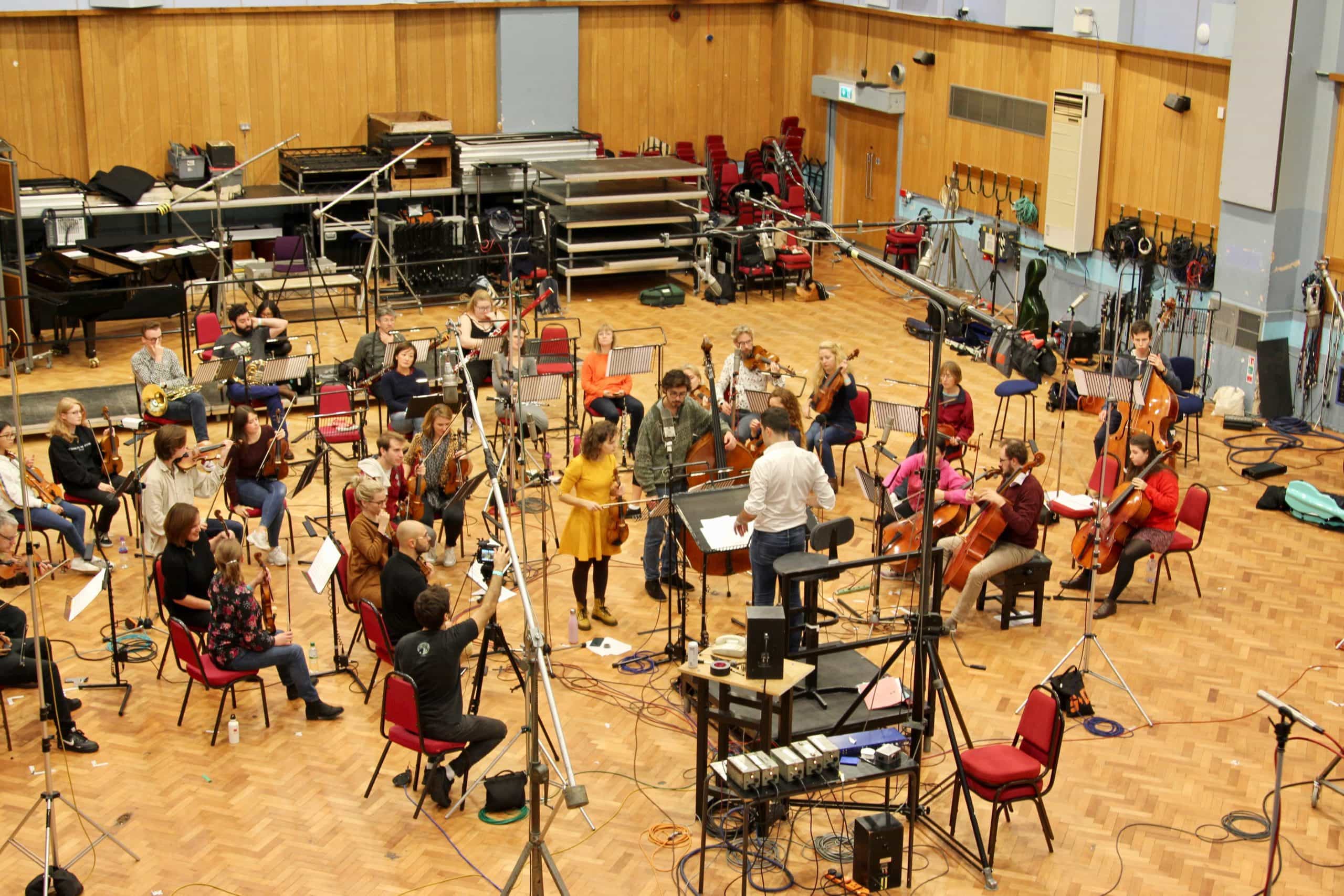 The London Euphonia Orchestra recording in Abbey Road Studio One

I was excited to learn that John Kurlander would be flying over from his adopted home town of Los Angeles to present the workshop and was delighted to be asked if I could organise an orchestra we could use as „guinea pig“ for the day. Finding an orchestra is easy, but finding one that was willing to offer its services for free is not quite so easy.

Luckily, my girlfriend is a member of the London Euphonia Orchestra, a wonderful group of enthusiastic, mostly amateur musicians led by Italian conductor Dario Peluso.
They were happy to donate their time and talents to the workshop, for which we were all very grateful. It’s not often that you have the opportunity to perform in the same room where Sergeant Pepper’s was recorded and to have a legend like John Kurlander in the driving seat as well as an offer they were honored to accept.

John has been a very busy man since I worked with him 36 years ago. In that time he has recorded most of the world’s major orchestras, including the London, Berlin, Vienna and St Petersburg Philharmonics, La Scala Milan and the Boston Symphony to name just a few. He has three Grammys to his name and soundtracks like the Lord Of The Rings trilogy in his CV.

The main techniques used for orchestral recording around the world were developed back when recording itself was in its infancy. In case you are wondering, that is long before I started my career. Today’s recording engineers are using the same kind of microphones, in the same positions, as their predecessors did three-quarters of a century ago.

The „Blumlein Pair“, developed in the early 1930s by Alan Blumlein while working at the EMI research laboratories, uses a single pair of bidirectional mics situated high above the conductor.
The „Decca Tree“, introduced in the 1950s, is still, in my opinion, the holy grail of microphone setups. It consists of three omnidirectional microphones placed in a triangular configuration about 3 to 4 meters off the floor, also directly above and slightly in front of the conductor. The third setup, often used in surround sound recording, consists of two „Outriggers“, usually omnidirectional, placed at the outermost edges of the orchestra. For the workshop, John mixed up all of these methods for the students to compare. 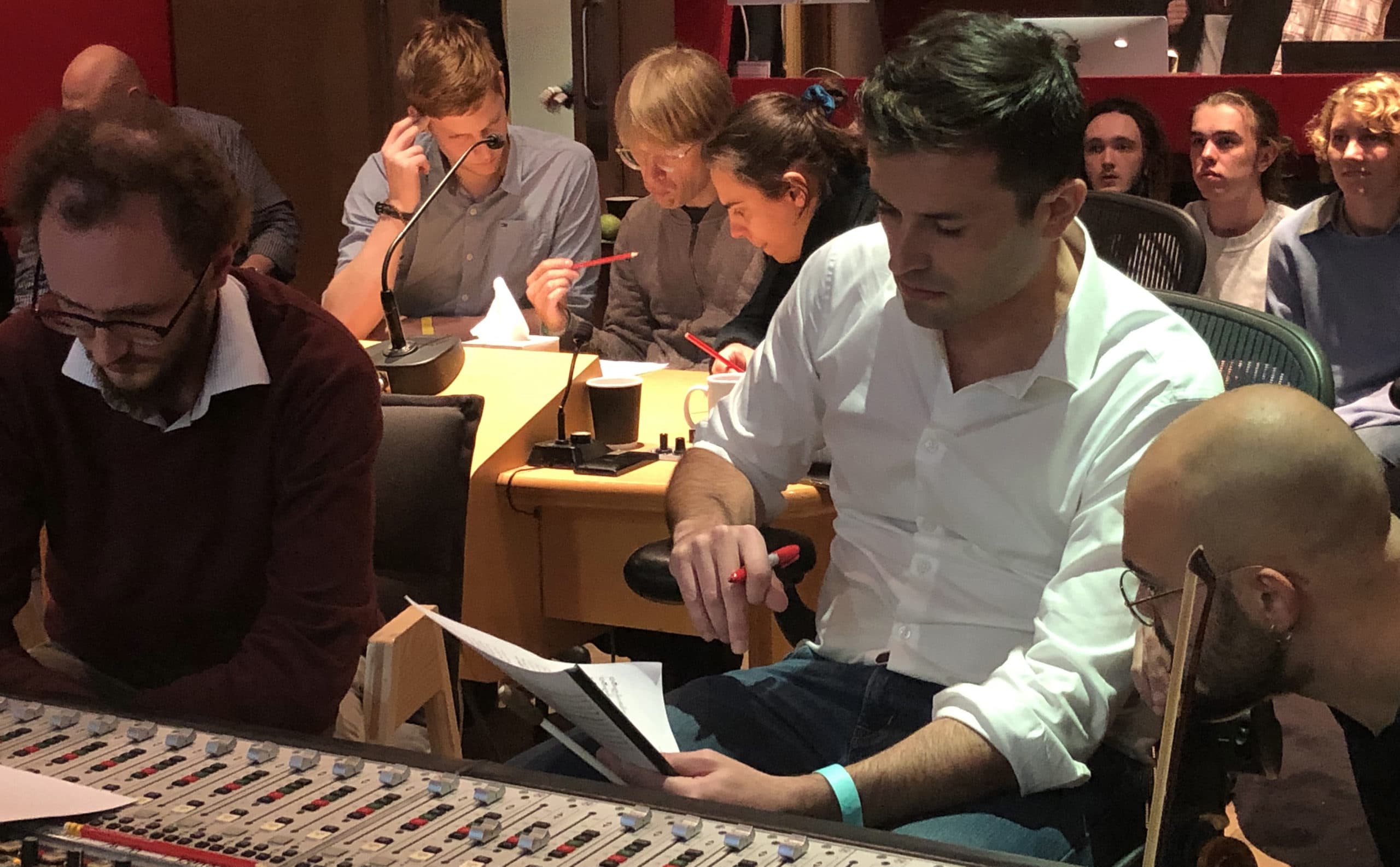 The Decca Tree was the favourite of the day, but its success is very dependent on the dimensions and properties of the recording space as well as of course the internal balance of the orchestra.
„Back in the 50s, engineers working for Decca would need to approve any venue suggested by the producer prior to a recording session and they would only proceed if they felt it was suitable for the Decca tree“, he explained. „But nowadays, people are using it in rooms that just don’t have the height, the right kind of acoustic and reflection to work with the system.“

He went on to say that the „go-to“ omnidirectional Neumann M50 mics used on the tree are actually more directional than you would think.
„They are more „cottage loaf“ in their response pattern,“ he told me later. „Everything over 3K is slightly more cardioid, while the low end stays omni“. I’ve often wondered why the stereo imaging of the tree is so defined and now I know! We also listened to the „Curtain“ array – a row of four omni mics (B&K) placed across and (vertically) above the front of the orchestra. John first saw this method in use by the BBC in live applications and tells me that it is now very popular in the USA, often used in modern film score recording and gaming soundtracks.

A spaced pair of Neumann KM 86s in cardioid were covering the woodwind section and Neumann U87s, also in cardioid, were used as close microphones (also known as „spot“ microphones) to add definition to the various sections of the orchestra when necessary (and occasionally to reduce it when required…).

For the soloists, John used one of his favourite ribbon mics – the RCA R44.
At home, he favours the more modern AEA 44, a recreation of the original RCA mic with the advantage that they have a lower noise floor and it’s easier to find a matched pair.
He actually owns two of these mics. With serial numbers 001 and 002, naturally.

Microphone selection and placement are, of course, one of the most important things to master. However, it is not only the technical side that can make or break a good orchestral recording. There is a practical side to consider as well.

Changing the seating layout and the proximity of the musicians to each other can greatly affect the internal balance, intonation and general performance, naturally resulting in a better recording.

The engineer’s instinct will be to have some physical space between sections of the orchestra so as to isolate each group of instruments as much as possible for the recording (strings, woodwinds, brass, percussion, etc). However, especially in a larger space, and even more so with an orchestra without much recording experience, this can lead to problems.

It can be more difficult for the musicians to hear each other in this setup and to make music together in the way they normally do.
After a few „head-scratching“ minutes John repositioned the brass section, moving the french horns off their podium onto the studio floor, and reseated the entire orchestra closer together. It was obvious that everyone was more comfortable playing in closer proximity to each other and this together with softer brass resulted in a better blend and improved tuning overall.

This and more was evidence of John’s experience and expertise in this field and showed above all that studio psychology and physics can work together in the studio in a positive way. Whatever the size of the room and amount of musicians, there is always a way to optimise the performance and in doing so facilitate the best recording possible. 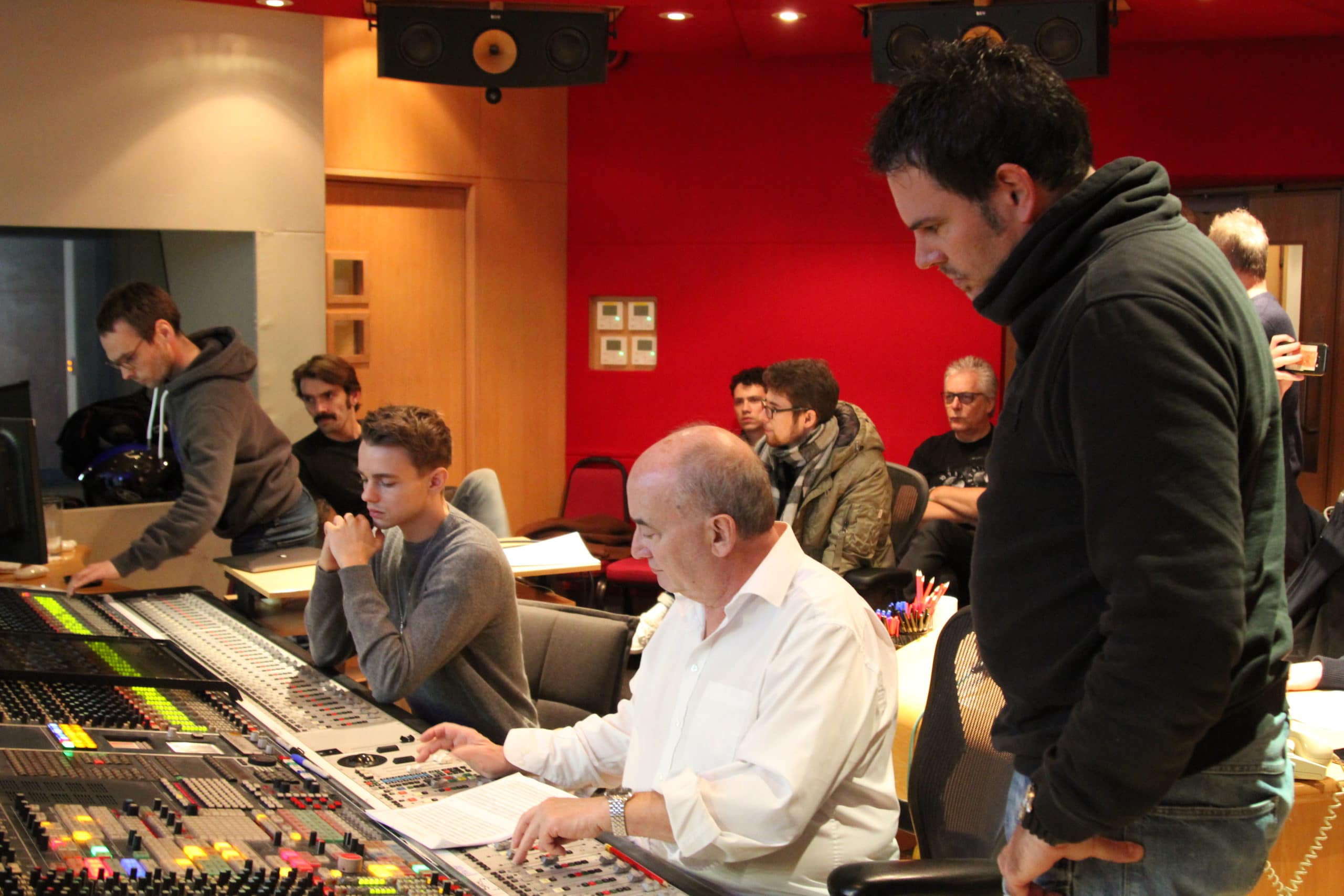 John Kurlander at the console

It was clear that this magical room is world-famous for a reason. As the orchestra completed the first piece, I saw tears in the eyes of Abbey Road Institute Frankfurt’s manager Ulli Schiller.

I’m hoping they were tears of joy!

You will find a link to our official Soundcloud page below where you can listen to the recording below: