We at the Abbey Road Institute have a very special partnership with the Games Academy in Frankfurt. In the following blog article ARI student Stephan Ahrends shares his experiences:

Sound design for computer games is a booming market with a fast-rising demand. After studying at Abbey Road Institute Frankfurt for only about two months I was given the exciting opportunity to dive into this field, which was completely new to me at the time. We were visited by students of Games Academy, which is located right next to our institute.

Multiple groups were presenting us their most recent game projects and kept emphasizing the importance of high-quality sound design and music productions accompanying the game. At the end of the presentations, we were given the chance to connect with the different game creators. I was skeptical at first if there would be any new game idea that catches my attention until I noticed a team planning on creating a mobile game similar to “Clash of Clans”. We started talking about their intentions and I quickly got the feeling that I would be given a lot of decisional power if I got the chance to be part of the project.

Especially because the team that is responsible for sound and music ensured me that they would be thankful for every support, I wanted to set up an appointment at Games Academy for the following week, where I was introduced to the whole team and got an even better overview of the concept. I learned that the game was supposed to be in a comic style and rather droll. It should include fights between Barbarians and Romans (similar to Astrix and Obelix) and visually influenced by Robin Hood. An interesting mashup!

Getting to know the game

Afterwards, they gave me a list of missing sounds and game sections that still needed music. This was, for example, the case for the game menu, in which the player is prepared for the fight rounds. The actual fight scenes were also missing sounds and music. After clarifying the framework and time schedule I started working and made myself familiar with the sound and music characteristics of the genre. I was instructed to create background music that supports the movements of the characters and motivates players by building up suspense.

The style should suit the setting, which is why I had the idea to compose rather relaxing, middle-age music for the menu background and marching drums driven fanfares for the fights. Exaggerations were welcomed up to a certain degree, given the comic setting.

After a couple of weeks, I created my first soundtrack, while always being in close contact with the team to ensure that it suits their expectations. One week before the so-called “GoldMaster”, a deadline where the game is introduced to the public, we had our last project meeting.

During this meeting, some team members described to me what kind of images they associated with my soundtrack and I was really relieved that they exactly matched my visions. Additionally, the team symbolically handed me a t-shirt giving me the feeling that I was truly part of the team. Ultimately the presentation of the game in front of the grading lecturers and students was a big success. 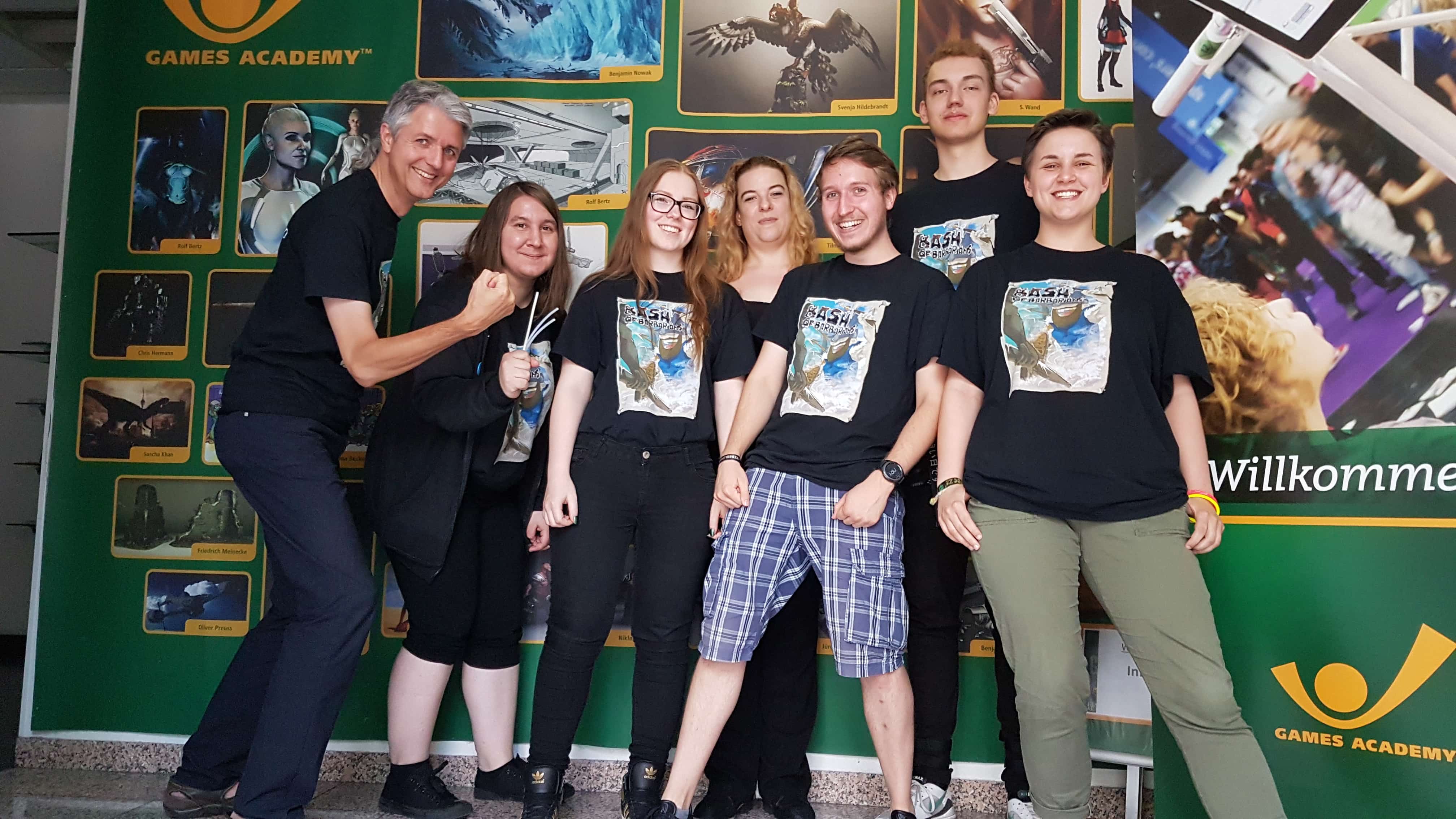 I want to thank the whole GA team, especially Lucas Klugbauer and Sonja Köck, for the cooperation and for giving me this opportunity. It was a great experience outside of my comfort zone that broadened my horizon. After the game is before the game. See you next time!

Written by Stephan Ahrends and edited by Ulli Schiller