Something is happening in the ‘Osthafen’ area of Frankfurt! A special kind of cooperation has started; Students at the Abbey Road Institute will soon have the opportunity to work on several recordings with the renowned and Grammy-Nominated Ensemble Modern Orchestra. Musicians of the contemporary music orchestra, which have gained recognition far beyond the German borders receiving many awards, have already shown their unique musical capabilities during two recording sessions in the large recording room at Abbey Road Institute Frankfurt.

In the footsteps of Frank Zappa

Since one of the many themes of Abbey Road Institute’s curriculum is ‘learning from the past’, let’s take a look back in the year 1993; when the extraordinary musician Frank Zappa released his orchestral music album ‘Yellow Shark’ shortly before his death. The cross-border composition was then classified as unplayable and rejected by numerous international orchestras. “But we just thought it was exciting, so we flew to Los Angeles and recorded the whole thing with Zappa”, recalled Rainer Römer, percussionist and founder of the “Ensemble Modern” in a conversation with campus manager Ulli Schiller.

The Yellow Shark is an album of orchestral music by American musician Frank Zappa. Released in November 1993, it was the last Zappa album to appear in his lifetime. It features live recordings from the Ensemble Modern‘s 1992 performances of Zappa’s compositions. In the album’s notes, Zappa describes The Yellow Shark as one of the most fulfilling projects of his career, and as the best representation of his orchestral works. – source

The ‘Ensemble Modern (EM)’ and the ‘International Ensemble Modern Academy’, are just a few steps away from the Abbey Road Institute. It was quite evident that we had to contact the neighbours directly. Already during the first meeting between the EM managing director, Christian Fausch, EM founder Rainer Römer and Abbey Road Institute’s manager Ulli Schiller, the foundation for the cooperation was established. And there were no limitations to the spontaneous ideas that arose for future productions. Therefore, only within a few weeks, the green light was given for the first joint projects to be done.

One of the first things on the list was the recording of the solo album of EM’s percussionist, Paul Cannon, featuring Eva Böcker (Cello Player at EM), David Haller (Drummer at EM) and Rainer Römer (Percussionist at EM). As the sound engineer, master of scoring and artist-critic from Cologne, Wolfgang Ellers was chosen for the job.

“For our students, these sessions were more than just trial lessons”, underlines Ulli Schiller. “They could gain through first-hand practical studio experience, how the combination of composition, arrangement, and interpretation, as well as the precise choice of microphones and their positioning, can create an amazing sound experience.”

For this recording, sound engineer Wolfgang Ellers could choose from a large variety of microphones, which is part of Abbey Road Institute’s extensive collection. During the process, he took the time to thoroughly explain his specific microphone and positioning choice to our students. Nevertheless, there was still plenty of room for experimenting. The comparisons between several stereo microphone placements and different converters turned out to be particularly interesting. To give an example, they compared the legendary large-diaphragm Neumann SM69 coincident microphone in a stereo MS configuration with a wide AB configuration, consisting of two Neumann KM53 small membrane omnidirectional microphones. Both microphones are built upon the legendary Telefunken AC701 microphone tubes.

Besides setting and wiring up the numerous microphones, students also had to meet the specific requirements of the sound engineer. This included creating a mic-line plan, setting up the analogue SSL console and the Protools session. When Ellers raised the particular wish to record the MS-signal from the stereo coincident microphones, where the decoding had to take place in Protools, while at the same time, the off-tape stereo signal had to be monitored through the analogue mixing console… it sparked a lively discussion amongst the student group trying to find a practical solution for his request. A great example of putting your knowledge into practice. 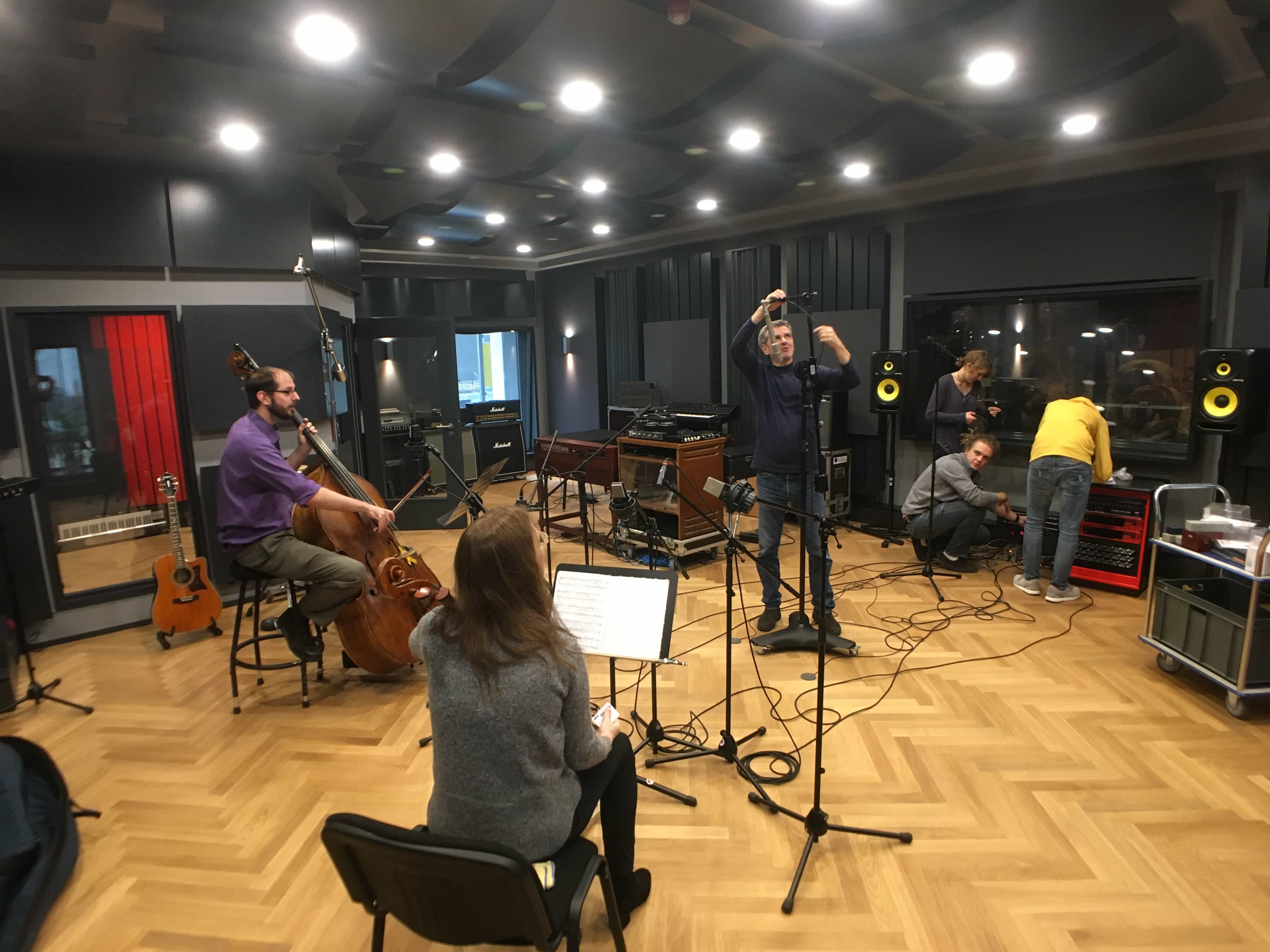 The Sound Engineer at Work with Ensemble Modern

One of the things that impressed the students most was the extremely concentrated listening abilities of Ellers during the recordings, while at the same time accurately reading along with the scores. Despite all modern technology, tools such as paper, pencils, and eraser remained the most important ones, which he used to document, note and correct everything in a rich manner. After each recording take, there would be a short discussion with the musicians through the Talkback channel to make necessary decisions. 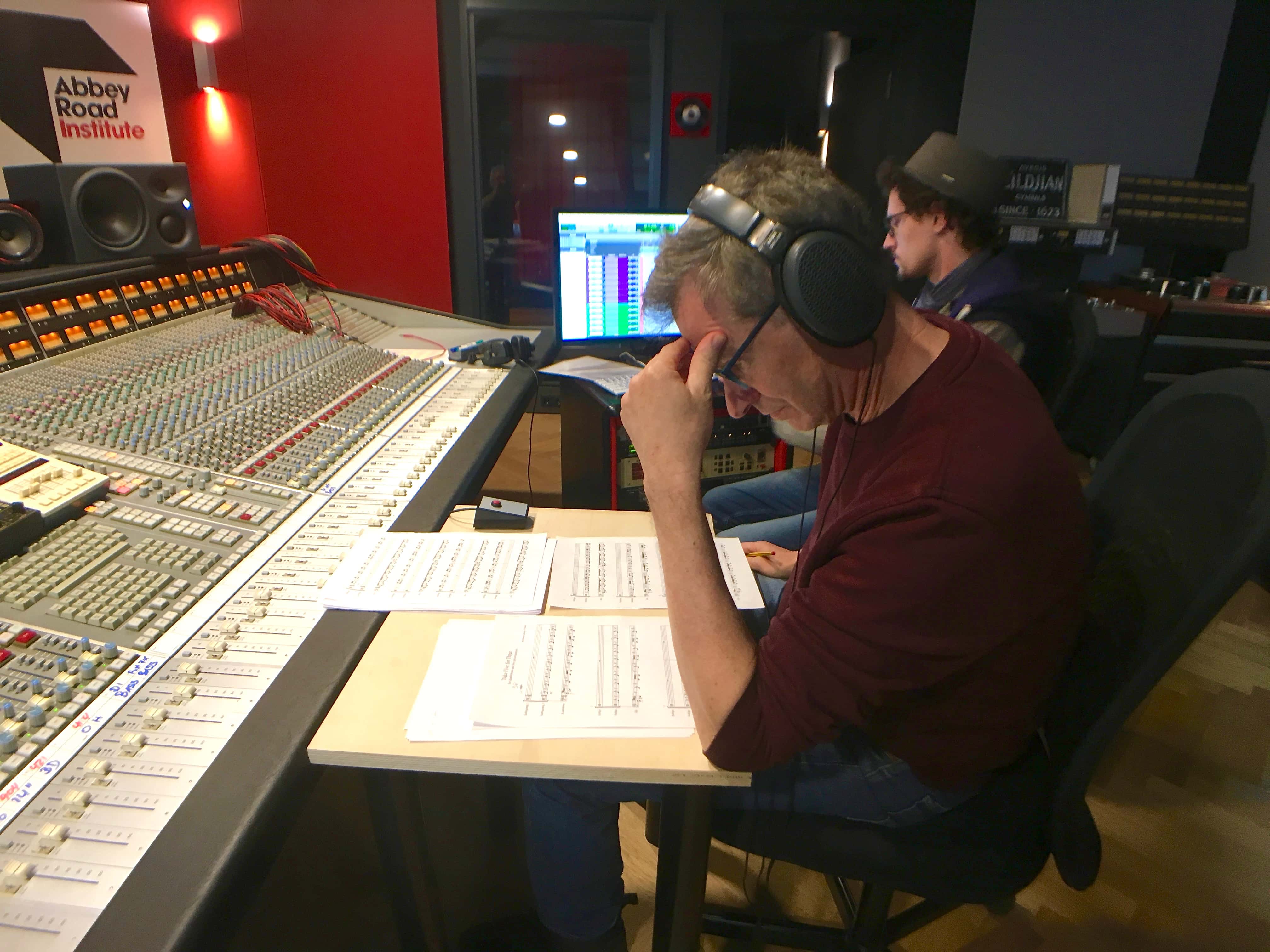 “Until the end of this year, there are two more sessions scheduled for our students with Sound Engineer Wolfgang Ellers, bass player Paul Cannon and the Ensemble Modern,” says Ulli Schiller, Manager at the Abbey Road Institute Frankfurt, talking about the upcoming events of this exciting cooperation. “We are very much looking forward to it!”